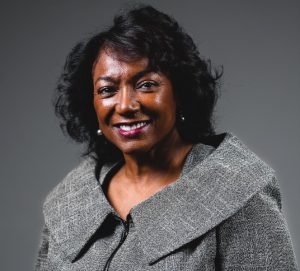 Shelley Carthen Watson has served as the president and CEO of YWCA Minneapolis since August 2021.

Shelley is a nationally-renowned labor and employment law expert and came to YWCA Minneapolis from the University of Minnesota, where she served as senior associate general counsel in the Office of the General Counsel, providing legal advice and counsel for a public research institution with over 30,000 employees.

Prior to her role at the University of Minnesota, Shelley was a partner with the law firm of Robins, Kaplan, Miller & Ciresi. She was the first African American woman to become a partner in a large law firm in the state of Minnesota. A former deputy commissioner of the Minnesota Department of Human Rights, Shelley also served as executive director of the Hennepin County Bar Association and Hennepin County Bar Foundation. An honors graduate of Macalester College in St. Paul, Minnesota, Shelley received her law degree from Northwestern University School of Law in 1985.

Throughout her life and work, Shelley has been a dedicated mentor, a champion for uplifting others, especially youth of color, and a passionate advocate for eliminating inequitable barriers to success in our society. As an advocate of youth development, Shelley served as president of the Minneapolis Chapter of Jack and Jill America, the sponsoring organization of the Rites of Passage program. Over the past 19 years, this program has recognized and assisted 275+ young African American men in their transition into leaders of tomorrow.

Shelley is a longtime supporter of YWCA Minneapolis and a two-term board member. She was a member of the successful Power to Soar campaign committee helping raise $22.5 million dollars to support and sustain YWCA Minneapolis’ future. Shelley received YWCA Minneapolis’ Woman of Power award in 2020 for her distinguished civic, professional and academic roles and extraordinary commitment to YWCA values of peace, justice, freedom and dignity.

Additionally, Shelley’s community leadership includes serving as vice-chair of the board of YWCA St. Paul, vice president of Programming at the Minneapolis-St. Paul Chapter of the Links, Inc., board member of the Northwestern Pritzker School of Law Black Alumni Association and Twin Cities co-chair of the Northwestern University Black Alumni Association. She is a former Macalester College trustee and has served as a board member with Planned Parenthood of North Central States; The Blake School and The Blake School Learning Works; the Mastery School; Jack and Jill of America, Inc., Minneapolis Chapter; WATCH; In Interest For Others; The Playwrights’ Center; Minnesota Minority Lawyers Association; The Fund for the Legal Aid Society and the Courage Center.

Shelley has continually been recognized for both her professional and community activities. In 2019, she received the Minnesota Lawyer In-House Counsel Award and was recognized in 2018 as a Top Assistant General Counsel by First Chair, an annual national selection of in-house counsel who have made significant contributions to the legal community. She is also a past recipient of the National Association of College and University Attorneys’ First Decade Award. She has been honored by Macalester College with the Catharine Lealtad Serve to Society Award, given to alumni of color who have used their education to distinguish themselves in service to community. She received the Hennepin County Attorney Community Leadership Award and was selected as one of the CityBusiness “40 under 40.”