One day in 7th grade, Claire was pulled out of her class to listen to a pitch about a new afterschool and summer program called Girls Inc. Eureka!. She was a bit intimidated when she heard about the five-year commitment of the program, but the focus on science, technology, engineering and math (STEM) piqued her interest enough to join.

A Career in Tech?

Before Eureka!, a career in technology was slightly foreign to Claire. She didn’t know anyone with jobs in tech and her family had some misconceptions about what that would mean; would she spend her life staring at a computer?! But Claire was still her family’s de facto IT support person and had even dabbled in coding after a neighbor suggested it to her.

The Eureka! program gave her a chance to dive deeper into STEM subjects in a concentrated, supportive way. The program exposed Claire to career opportunities she hadn’t heard of before and offered her a chance to meet women of color in technology fields. “Seeing someone similar to me was really valuable,” Claire says.

Challenges That Helped Her Grow

Throughout her high school years, the group became a steady place to be with peers who were accepting and encouraging; but the program also challenged her with new opportunities that helped her grow.

This included gaining hands-on experience at two incredible internships through the program. She interned at Amazon where she job-shadowed software developers and user experience (UX) design specialists and even created her own app prototype. She also interned at Tool Design Group, a leading engineering firm focused on designing safe, efficient and sustainable transportation systems.

Becoming a Role Model Herself

In her fourth year in the program, Claire was selected to be a speaker and deliver an essay that she had written to Girls Inc. participants, families and others. She says that afterward, she was approached by a younger girl who said she looked up to her and was also interested in computer science. “I was blown away that at 15, I could be a role model for someone else,” says Claire. Experiences like that helped Claire see that she could be a mentor for other girls the way women she met in Eureka! were for her.

“I was blown away that at 15, I could be a role model for someone else.”

A Sense of Independence

Claire says that overall Eureka! gave her a sense of independence and an opportunity to have experiences of her own. “It opened my eyes to what I can do for myself,” she says. “It’s an experience I never would have had anywhere else.” 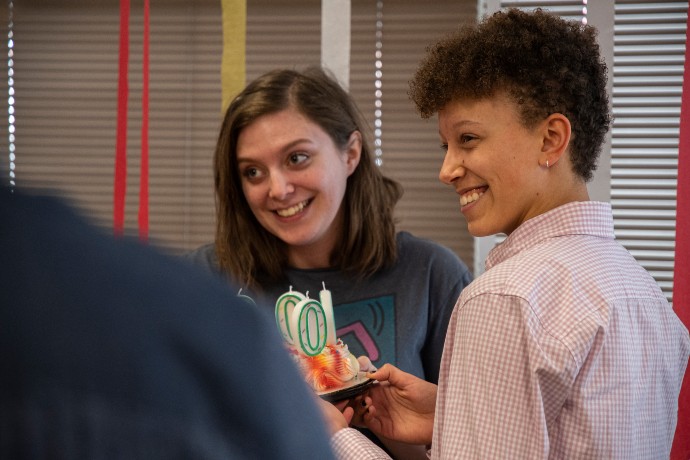 Claire is one of the first 25 participants who graduated from the five-year Eureka! program this past spring. She is now studying computer science and geology at Amherst College.

Working to Eliminate the Gender Gap in STEM

Women make up only 28 percent of the workforce in STEM. For women of color, this percentage is even smaller. Gender stereotypes, fewer women role models and the male-dominated culture of STEM classes, programs and workplaces are all barriers girls face when pursuing their interests in these fields.

YWCA Minneapolis’ Girls Inc. Eureka! program is a first-of-its-kind in the Twin Cities, designed to help nurture young girls’ interests in STEM fields, while supporting them through high school graduation and preparing them for the next steps in their post-secondary education.

Learn More about the Eureka! Program