The phrase “CRT” entered our lexicon in recent years, as our society began grappling with the concept of Critical Race Theory. In fact, last fall, YWCA Minneapolis held space for a conversation about this very topic. It is, however, very important to note that “CRT” is also an acronym for Culturally Responsive Teaching.

In K-12 education settings, this latter reference to CRT refers to an important framework grounding educators, youth workers–and all who aspire to be socially aware — in the need to shift teaching and guiding principles to recognize cultural and historical differences. Acknowledging the status of various populations in systems of power means honoring students — rather than systems — with culturally-responsive teaching. This counters the one-size-fits-all processes and results in better educational outcomes and more authentic relationships.

However, having two “CRT” acronyms in public dialogue can be confusing, so we put together this chart along with quotes from respective pioneering academic theorists for greater contextual understanding. 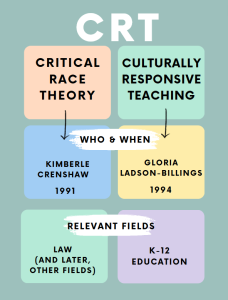 Kimberlé Crenshaw breaks it down. “Critical race theory is based on the premise that race is socially constructed, yet it is real through social constructions.” In other words, ask yourself, what is a “Black” neighborhood? Why do we call it “the hood?'”

“Labels like these were strategically produced by American policy,” says Crenshaw. And, “critical race theory says the idea of a Black person—’who I am in this country’—is a legal concept.” 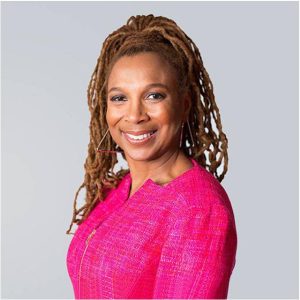 Critical race theory pays attention to the ripple effects of such decisions. It asks us to scrutinize how and why society looks the way it does. “These are the kinds of questions the other side doesn’t want us to ask because it wants us to be happy with the contemporary distribution of opportunity,” Crenshaw explains. 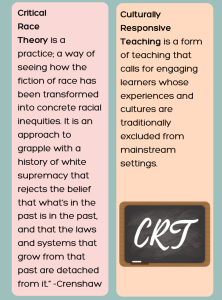 “Over two decades ago, Gloria Ladson-Billings introduced the term culturally relevant pedagogy to describe a form of teaching that calls for engaging learners whose experiences and cultures are traditionally excluded from mainstream settings. Based on her research of effective teachers of African American students, Ladson-Billings proposed three goals on which these teachers’ practices were grounded.

First, teaching must yield academic success.
Second, teaching must help students develop positive ethnic and cultural identities while simultaneously helping them achieve academically.
Third, teaching must support students’ ability “to recognize, understand, and critique current and social inequalities.” By centering these goals in their practice, culturally relevant practitioners can empower students not only intellectually but also socially, emotionally and politically.” 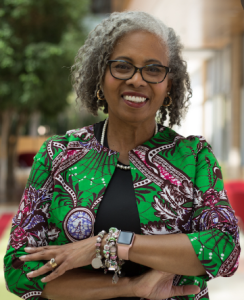 “Culturally responsive teaching is an approach that challenges educators to recognize that, rather than deficits, students bring strengths into the classroom that should be leveraged to make learning experiences more relevant to and effective for them. Adopting CRT goes beyond celebrating students’ cultural traditions once a year.” — Gloria Ladson-Billings

Ladson-Billings continues, “Educators who practice CRT set rigorous learning objectives for all of their students and they continually build helpful bridges between what students need to learn and their heritage, lived realities and the issues they care about. In short, culturally responsive teaching is about weaving together rigor and relevance.”

“I See My Work As Talking Back:” How Critical Race Theory Mastermind Kimberlé Crenshaw Is Weathering The Culture Wars – Vanity Fair