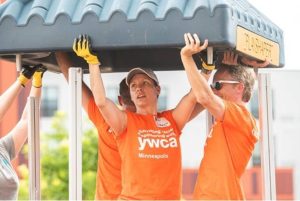 The leading architects of “playspace equity” at national nonprofit KaBOOM! transformed our play area at YWCA Midtown in spectacular fashion. With generous financial backing from Welly Health, contributions from Blue Cross plus sweat equity from employees of both companies, the summer project was completed to the rave reviews of our early learners!

“The big slide is the best ever! I was going so fast…did you see me?

How we got here

In 2017, the playground at YWCA Midtown was deemed unsafe and the equipment had to be removed. According to Director of Institutional Giving Emily O’Gara, “In 2014, we put our hat in the ring, hoping to be KaBOOM’s next project. So we were thrilled to get the call this past January telling us that Welly stepped up to take on the heftiest portion of the $165K price tag to build our new play space!”

“Those people worked hard on it and we get to play on it and it’s awesome.”

KaBOOM!’s reputation for building “a playground in a day” held true when it came to assembling and mounting play structures. But getting to that day actually took months of planning and two days in which employee volunteers from Welly and Blue Cross literally moved tons of dirt in preparation for the big build. 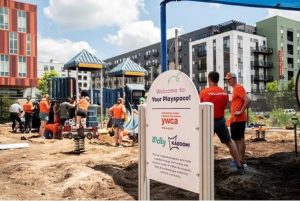 “This is the best playground any daycare I have been at!”

It Takes A Village

Vice President of Early Childhood Education Stephanie Thomas says, “This simply could not have happened without the help of our corporate partners.” Especially impressive was the degree to which KaBOOM! involved our community. “They talked to our teachers, our parents and the children, who were asked to draw pictures illustrating what they wanted.” Renderings based on that work were produced by KaBOOM.

“What is accomplished in a project of this magnitude represents a feat of engineering infused with a spirit of generosity from many.”—President and CEO Shelley Carthen Watson, YWCA Minneapolis

Thomas says parents had concerns about safety and requested rubber surfacing in favor of wood mulch. That’s when KaBOOM! impressively stepped forward, securing $45K in funds from an anonymous donor to cover the cost. Adds President and CEO Shelley Carthen Watson, “What is accomplished in a project of this magnitude represents a feat of engineering infused with a spirit of generosity from many.” 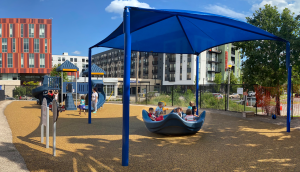 “The slides and the spinny chair are the most fun!”

State of the Art

KaBOOM!, the experts in play, incorporated what they call a “state of the art” playspace. But what does that mean? According to foreman Derrick Dixon, who hops planes going city to city to lead KaBOOM! builds, that refers to the Omni Spinner and the Thundercloud Climber. The spinner is the modern day version of the old merry-go-rounds, but safer, made of material with smooth edges and built close to the ground. The Thunderhead Climber is a slide on the inside, and a climbing structure on the outside. Dixon also calls special attention to the Fire Truck bobble, “See that? That was the idea of a preschooler here who said he wanted a firetruck. We got it for him.” 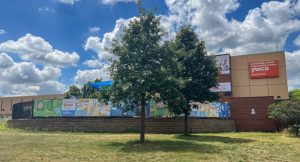 “Do you see those pictures on the walls? I see a pink animal and there are other animals too to watch us play.”

ECE teachers reported the children are enchanted with the murals, too. They line the interior and exterior of the playspace to provide privacy. When O’Gara learned of this, she said that was a wonderful takeaway, “That was an add-on that Welly threw in. They didn’t have to but they paid for it and did the design work, too.” Passers-by can take notice. When in the neighborhood at East Lake Street and 22nd Avenue, be sure to look up!