My Child Has Grown Leaps and Bounds

In this blog post Margaret, one of our Early Childhood Education parents tells us about her experience with her son in our early learning center at Abbott Northwestern Hospital. She tells us how her son has grown throughout his time in our care.

Tell us about your child. How old is he and what are his interests?

I have one son, Nolan. He’s 9 months old and into everything! His current obsessions include pulling up on furniture, opening the same kitchen drawer over and over again and trying to lick the dog. He is also an expert at flipping on the changing table, waving and clapping.

What first drew you to YWCA’s program?

I have a close friend whose son attended YWCA Abbott for almost four years. I heard great things and decided to check it out. Instantly, I was struck by how much the director clearly cared for all of the kids, and I loved how the program (pre-COVID) took advantage of neighborhood resources, like field trips to the Swedish Institute and Midtown Global Market. And in contrast to other daycares I had toured, the diversity of both families and teachers at YWCA Abbott, and YWCA’s emphasis on diversity and inclusion, resonated with me. I’m raising a white, male child in today’s world; I want to make sure he understands from a young age that he is not the most important person in the room.

“I’m raising a white, male child in today’s world; I want to make sure he understands from a young age that he is not the most important person in the room.”

Like many parents, I was apprehensive about leaving my child at daycare with strangers for the first time. But YWCA Abbott’s teachers didn’t stay strangers for long! It is so clear how much the teachers care for Nolan, and that they genuinely enjoy being around children. Nolan laughs and squeals when he sees them every morning and waves goodbye at the end of the day. During the week, the teachers spend more time with him than I do, so knowing that he loves them is pretty important. Five months in, I can’t imagine leaving Nolan with anyone else. 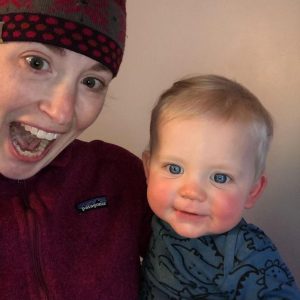 Has the pandemic interrupted child care or family life for you?

I’ve only been a parent during the pandemic, so I don’t have the same frame of reference as others. But it’s definitely been challenging. Nolan’s room shut down for a couple weeks in November due to a COVID exposure, and juggling full-time work and full-time child care as a single parent was exhausting. We’ve been lucky since then and haven’t had any other closures. I’m impressed with how seriously the teachers and staff take mask-wearing, even with small children trying to pull them off all day! Their efforts are helping keep kids and families safe and healthy.

How have you seen your child grow over the years since first enrolling with YWCA?

Nolan has been at YWCA Abbott for five months and has grown by leaps and bounds in that period. He loves to be around other kids and is social with just about everyone he meets. He can hold his own bottle, clap and wave — all things I know he learned at child care.

I feel incredibly fortunate to have Nolan attending YWCA Abbott. Finding a place where you’re comfortable leaving your child can be tough, but I never doubt that Nolan is receiving the best care possible. I look forward to seeing the teachers every morning and know that they’re worth their weight in gold!

SCHEDULE A VIRTUAL OR IN-PERSON TOUR