“We must honor MLK by honoring him,” author and historian Carol Anderson told Vox. “We honor him by not hijacking his words and twisting them to fit a white supremacist agenda.”

As we approach the only U.S. holiday named for a Black leader, it is imperative that we seek to understand the evolution of Dr. King’s belief systems without subscribing to the whitewashed and sanitized version so often quoted in popular culture. According to Michael Eric Dyson, Dr. King became increasingly disillusioned with the pace of change and moved beyond the nonviolent practices that he is so consistently and comfortably known to have espoused.

He was recently described by mainstream media as “giving his life for the cause” when in reality he was assassinated for questioning the status quo.

So before you post your annual MLK quote on January 17, do your due diligence to better understand how Dr. King’s views evolved over time.  To help you in this intentional unlearning and relearning, we have gathered resources below specifically regarding his anti-racist, anti-capitalist and anti-militarist views.

Dr. Bernice King, CEO of The King Center founded by her mother Coretta Scott King, has worked tirelessly to ensure that her father’s legacy is not usurped or co-opted by those who wish to promote a color-blind approach to change.  She and her siblings consistently challenge politicians that claim to love Dr. King while also watering down his more radical views or taking his words out of context.  For more information on her life and work, check out The King Center website. 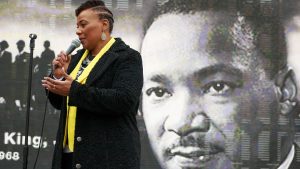 The Legacy of a King

When considering the definition of legacy — something from the past, something that remains from a previous generation or time — Dr. Martin Luther King, Jr. (MLK) has legacy that continues to uplift his work. Part of such a revered legacy includes Dr. King’s four children, namely Rev. Dr. Bernice A. King, not only because of her father but also because of who she is within her own right. Rev. Dr. Bernice King is an attorney, ordained minister, activist, global thought leader and CEO of The King Center. While Rev. Dr. Bernice King often is cited with having great oratory skills like that of her father, she credits much of who she is to her mother, Coretta Scott King.

Evolution of a King

Rev. Dr. Bernice King was just five years old when her father was assassinated and yet grew up with the understanding of the legacy left behind. By the time King was seventeen she was invited to speak at the United Nations, advocating against the South African Apartheid. Rev. Dr. Bernice King’s messaging is rooted in anti-racism by stating that we have to begin with “disrupting the comfortable,” calling on white people to do the heart work for self-reflection and understanding before doing the hard work of anti-racism.

In a speech accepting the Keepers of the Dream Award from the National Civil Rights Museum, King spoke vulnerably about growing up with resentment and hatred for white people, particularly white men, as she grappled with the loss of her father and experiences she endured. She went on to say that over time and by leaning on MLK’s teachings, an understanding that love, forgiveness and service to humanity aided in her reconciliation and accepting of white people to further the work of equity.

Speaking as a King

Today, Rev. Dr. Bernice King leads The King Center in Atlanta, Ga., where she is the CEO. The King Center focuses on Nonviolent365, an educational training to influence equitable change on national and global infrastructure. The King Center also has a youth leadership academy and several community forums, and the center houses MLK archives.

Additionally, Rev. Dr. Bernice King continues in the same fight for justice as her father in issues of deep seeded racism, gun control and nonviolence, speaking across the world to further promote equality. After years of fighting for voter rights like MLK, Rev. Dr. Bernice Kings stands in solidarity with the current battle over voter rights legislation. The King family has called for no “celebration” of MLK Day this year (January 2022) without action on voter rights legislation, specifically The Freedom to Vote Act and John Lewis Voting Rights Advancement Act.

The Freedom to Vote Act would make it easier to vote by making election day a public holiday, ensuring states have early voting for federal elections and allowing all voters to request mail-in ballots among other provisions. John Lewis Voting Rights Advancement Act, named in honor of civil rights leader who fought with MLK, is aimed at fighting voter suppression and restoring enforcement provisions of the 1965 Voting Rights Act.